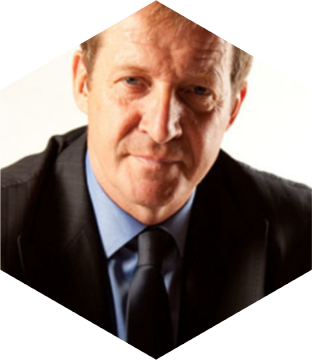 Alastair Campbell is a writer, communicator and strategist known for his role as former British prime minister Tony Blair’s spokesman, press secretary and director of communications and strategy. Still active in politics campaigns in Britain and overseas, he splits his time between writing, speaking, charity work and consultancy. In recent years, Alastair has become increasingly involved with mental health charities and causes, speaking about his own experiences with depression, psychosis and addiction. He is author of fourteen books, including the no. 1 best-selling Winners and How They Succeed, and has produced an award-winning documentary on his personal experiences with mental breakdown. His work has won considerable praise with mental health charities and campaign groups for helping break down the taboo surrounding mental health, leading to his achievement as the ‘Mind Champion of the Year’ in 2009. By co-founding the all-party campaign Equality4MentalHealth, which was credited by parliament, he has secured an extra £600million for mental health services. Alastair has been awarded an honorary fellowship of the Royal College of Psychiatrists in recognition of his leadership role in breaking down the stigma surrounding mental illness and in fighting for better services. Alastair is now involved in various aspects of journalism, including chief interviewer for GQ Magazine where he writes monthly pieces and has covered famous figures including Prince William and Jose Mourinho. His other journalist work includes being a columnist for International Business Times, editor-at-large for The New European newspaper and hosting a joint podcast featuring interviews with notable individuals from politics, sports and other topics of interest.