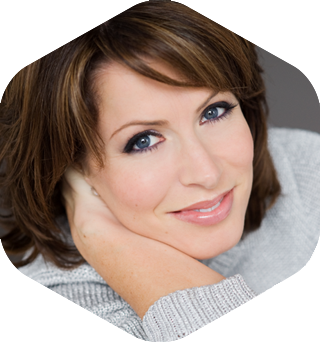 Natasha Kaplinsky is known as one of television’s best-loved broadcasters.

She is currently one of the anchors for the ITN network and for the previous three years was the ‘face of Five’, anchoring the channel’s main evening news programme.

Before her role at Five News, Natasha spentve years working at the BBC. Her time there began by co-presenting Breakfast with Dermot Murnaghan. This daily three-hour live show, combining news, current airs and softer items, was where she developed a reputation for incisive interviewing combined with a gentle touch where necessary. Her success on the show led to Natasha’s move to co-present the Six O’clock News, where she stayed for two years.

Alongside her news-casting Natasha is widely known for her triumphant appearance on the BBC’s prime time Saturday night show Strictly Come Dancing, becoming the shows first ever Champion! Natasha went on to perform in the Christmas special a year later and co-presented the second series with Bruce Forsyth.

Natasha has also enjoyed the chance to host a variety of factual and entertainment programmes. Most recently ITV’s The People’s Medal, Missing and On the Run which sees Natasha and co-presenter Mark Williams-Thomas follow an undercover team as they attempt to track down and capture wanted criminals so they can be brought to justice.

In 2012 Natasha fronted a 6-part entertainment series, Born to Shine, which aired live on Sunday nights on ITV1. The series supported Save the Children’s No Child Born to Die campaign, of which Natasha has been an Ambassador since 2010. She has also hosted New Year Live for the BBC, and joined Terry Wogan to co-present Making Your Mind Up, both for BBC1, the Proms, BAFTA red carpet coverage, The VE Day Celebrations with Eamonn Holmes, live from Trafalgar Square, and appeared on numerous current aairs and chat shows.

In September 2007, Natasha was the subject of one episode of the popular BBC1 television series, Who Do You Think You Are?

As an ambassador for Save the Children Natasha has had the opportunity to travel widely with the charity, with visits to South Africa, Mozambique, India, Sierra Leone and Jordan, visiting Save The Children Projects and promoting their work worldwide.

Natasha lives between London and Sussex with her husband and their son, Arlo, born in September 2008, and daughter, Angelica, who was born in April 2010, and a growing assortment of animals. She combines her family life with a busy schedule of broadcast and corporate work, and guest appearances.