Awards were given to the most attractive innovation in terms of technology and market potential. Entrants were judged on the quality of their pitch as well as their entrepreneurial readiness.

The audience backed French startup Rythm. Quentin Soulet de Brugière (Co-Founder & CSO) and his team have developed their first product 'Dreem', a wearable headband that monitors brain activity using EEG and actively stimulates it to enhance the quality of deep sleep. Its mass-market release is planned for 2017. 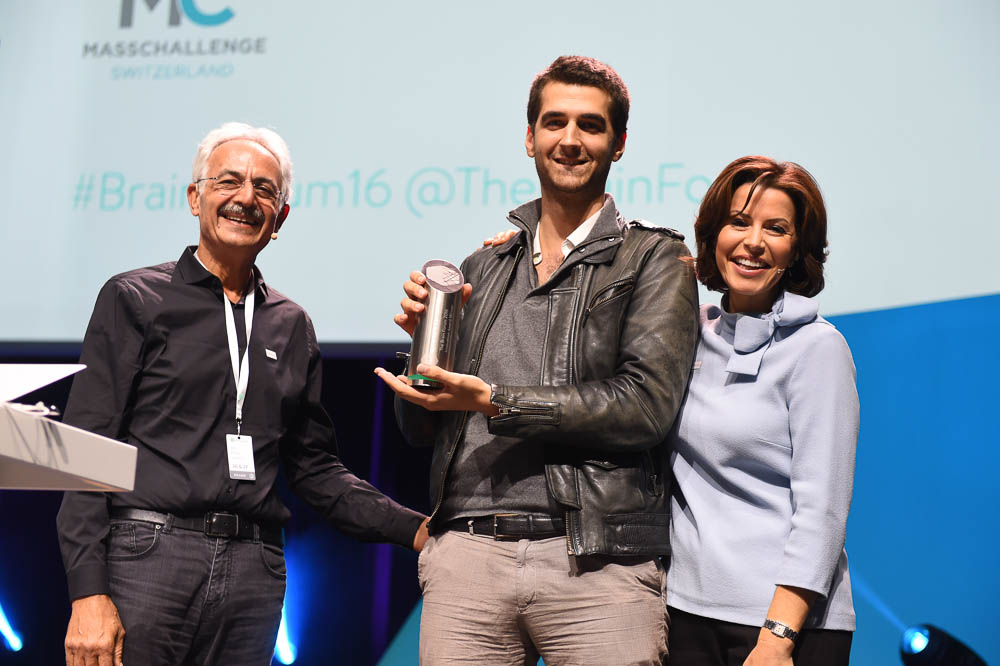 The jury was impressed by this new class of immunomodulatory drug by virtue of its proprietary Antibody-Catch® technology platform. Platform-derived compounds selectively eliminate disease-causing autoantibodies in autoimmune disorders. According to Ruben Herrendorff (Co-Founder), clinical trials will start in 2018. 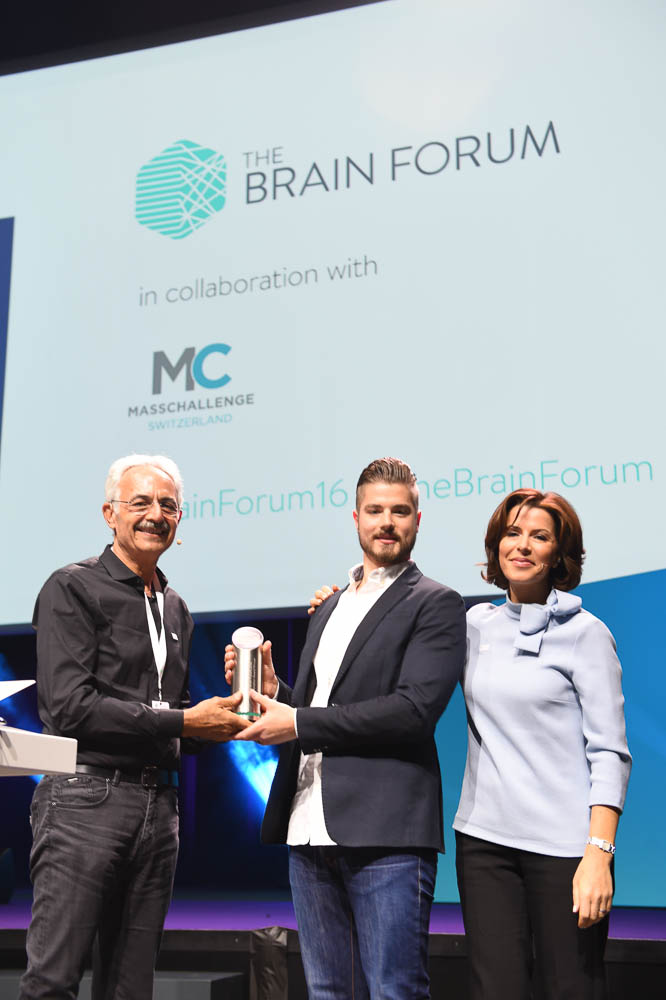 MassChallenge, the most startup friendly accelerator on the planet, awarded Pragma Therapeutics, a France based company developing new drugs designed to fight post-traumatic stress disorder, hearing loss and tinnitus by treating their cause directly. The new concept presented by Sylvain Celanire (CEO) is linked to mGlu7 receptor allosteric inhibition to prevent or treat glutamate-induced brain and ear dysfunctions. 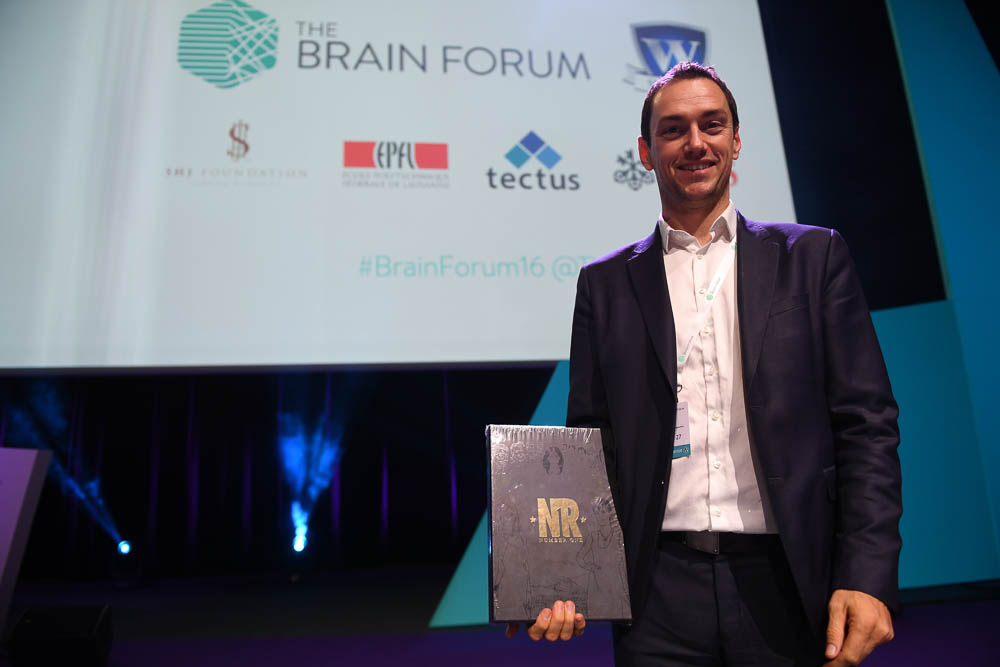 ATLAS Neuro is a spin-off of IMEC and the University of Freiburg and fabricates brain implants for the preclinical market to study neuronal networks and neuronal systems for better understanding and treatment of neurological disease and disorders. ATLAS Neuro is located in Leuven, Belgium.

Our Machine Learning algorithms analyse brain MRIs to predict which patients with Mild Cognitive Impairment (MCI) will progress to Dementia within one year. With our tech, pharmaceutical companies can run much cheaper and shorter clinical trials because they can enrol only the MCI patients that are likely to transition soon.

Axinesis, a spin-off from the Univ. catholique de Louvain (Belgium), carries a clear mission : to improve functional recovery of patients through innovative and accessible robotics technologies dedicated to the rehabilitation of impaired upper limbs of stroke adults or cerebral palsy children.

About a 100 million people worldwide suffer from some form of dementia. Many of them do not receive a formal diagnosis because detecting brain disease is often time consuming, expensive and ambiguous. AzEz is a revolutionary portable self-use device that reliably detects dementia and Alzheimer’s disease with a drop of blood, in 10 minutes, for 5 $.

Nanolive developed a revolutionary microscope, which allows for the first time to explore a living cell in 3D without damaging it. Since the cell is the basis of all life on earth, this will change all the rules in schools, pharma, cosmetics, and research.

Neuranalyze.com is a cloud services platform that can automatically analyze EM neuronal/brain images, more than 10 times faster and 10 times cheaper than traditional (on premise) analysis. On a global scale, that could save universities and research institutes millions of Dollars and speed up the discovery of new therapeutics.

Neurologix C3Logix=Comprehensive Concussion Care, the first and only mobile based concussion management system that documents and manages this highly complex condition. It was developed, validated, and is still the standard of care at the Cleveland Clinic’s Concussion Center. C3Logix assesses the domains that are impaired by a concussion, standardizes the data collection process, and documents the entire concussion lifecycle (baseline, sideline, and post-injury testing, systemize incident reporting, and guiding users through the return to play, learning, and work processes). Our data assists clinicians to prescribe a more advanced treatment plan that leads to better patient outcomes. While our telemedicine standard of care fundamentally changes the way medical care is delivered in normal and underserved communities. We utilize a SaaS business model, which has assisted the medical community, encouraged proper documentation, and treatment protocols.

Neuron Guard is a medical device company that is developing a brain protection system. Our device, a refrigerating collar, can be used for emergency and hospital treatment of stroke, cardiac arrest and traumatic brain injury. Our system is based on the neuroprotective effect of targeted temperature control. It can be used directly at the site of the event and also during hospital treatment.

PathMaker Neurosystems is a clinical-stage neurotechnology company located in Paris and Boston that is developing non-invasive neurotherapy systems based on Coordinated Multi-site Neurostimulation to treat patients with paralysis, muscle weakness and spasticity. We are collaborating with leading research institutions including the Brain and Spine Institute (ICM) in Paris and the Feinstein Institute of Medical Research in New York and have initiated IRB-approved human clinical trials for our first-in-class technology.

PRAGMA Therapeutics is a biotech company developing small molecules acting on mGlu7 receptor and normalizing glutamate dysfunctions, representing an innovative approach for the treatment of Post-Traumatic Stress Disorder (PTSD) and Hearing Loss (such as noise-, age-related hearing loss and tinnitus).

PRAGMA fully externalizes its R&D operations to CROs and leading academic platforms in USA, Europe and Asia, advancing its asset to first-in-man by 2018. Post-Phase 2 PoC, PRAGMA envisages an exit through structured deal with major pharmaceutical company.

ReHaptix is developing an app comprising a series of tests, which allow patients suffering from stroke, multiple sclerosis and Parkinson’s disease to measure the severity of their arm and hand impairments and monitor their progress using a simple tablet.

Rythm is a leading neurotechnology startup based in Paris and San Francisco, with a 50 people team. We are developing the first active sleep wearable, called Dreem. Dreem monitors your brain activity during sleep and sends sounds stimulations at key events of your night, to improve the quality of your deep sleep. By merging neuroscience and the most advanced technology, we have created a wearable that not only tracks your sleep but also enhances your deep sleep. We launched a limited series edition, called the Dreem First program, so Dreem is now available for $350.

So far, Rythm have been covered by a lot of US publications, including TechCrunch, Venture Beat, Wareable and Forbes, and by French press: Le Monde, TF1, French Web, and M6. Rythm have also won prestigious awards for its scientific approach and its innovation: The Global Innovation Contest, CEPAME prize, Paris innovation prize or iiAwards.

TRUUST Neuroimaging, Inc. is a neurotech startup originally out of Truust, Denmark, and now a graduate of the IndieBio accelerator program in San Francisco. The founders are engineers come AI researchers come experimental neuroscientists that after a stint at CERN realized the huge potential of recent advances in signal processing when applied to understanding the brain by increasing the spatial resolution of existing neuro-imaging hardware, like MEA, EEG and MEG.

Our neuro-imaging cloud-service dramatically increases the resolution of existing and future neuro-imaging systems (including historical data), at a fraction of the cost of equivalent hardware, and far beyond what is possible with hardware alone.

Increased neuro-imaging resolution represents a leap forward in clinical diagnosis, treatment and prevention of brain-related health problems, such as autism, epilepsy, age-related and neuro-degenerative diseases like ALS, Alzheimer’s and Parkinson’s.